Yesterday I passed a mountain of wild roses, just like the ones that grew in the back pasture when I was a kid. Their delicate scent brought a rush of memories - like water bending and curving and washing into spaces I hadn’t thought of in a long time.

Oh those roses, they started me on a memory chain that led to all sorts of wonderful places; and in the middle of the memories was my sister’s and my childhood friend, Laurie. She bridged the gap of two years between my sister Amy and me, and the three of us were inseparable. A Sunday afternoon not spent together was torture.

I remembered discovering the roses all those years ago. With bare feet, we picked our way carefully close to the thorny stalks and discussed what we could do with the thousands of blooms. Oh the endless possibilities – weave wreathes for our hair, play bride, or dry bunches of them for sale at a roadside stand. We settled on making our own perfume.

I don’t know what our fascination with perfume was, but whenever we went to the drug store, we’d dab 15 kinds of cheap perfume onto different portions of our arms. Afterwards in the car, dad would roll down the window and forbid us to ever look at another bottle of perfume.

Of course, we didn’t know anything about the process of making perfume, and without the benefit of the internet, we had to rely on what we may have read in a book. Laurie had heard in Paris they boil rose petals to make perfume. None of us had ever come close to a bottle of French perfume, but we’d heard it was the best.

An hour later we had to admit the sloppy mess of boiled petals was a failure. Mom had tried to warn us, “Those roses barely have any scent. I don’t think you are going to accomplish much by boiling them.” But she knew we could do much worse; so she had left us at the stove with a pot of water and wooden spoons.

Undaunted, we looked for our next adventure. We really thought hoops skirts sounded amazing; so we agreed that Laurie would look for her fullest skirt, and the next time she came out, we would fashion ourselves hoops out of baling wire. But what to do with the rest of this day? That’s when we realized dad was getting ready to butcher rabbits. (I apologize to readers who were under the assumption that meat originates in a grocery store.)

“We could take those furs and dry them. Can you imagine if we had fur coats?” I asked the other girls. Every other idea we’d ever had paled in comparison to this new gem.

“It would probably take quite a while to get enough to make coats though,” Amy said.

“But we could at least have a stole,” Laurie suggested.

With rapture we imagined ourselves strolling into church with our fur finery.

So we casually approached dad and asked him to please reserve the furs for us after he was done butchering. He didn’t even ask why. He just said, “No.” We didn’t usually beg, but we had to make him see our vision.

“We want to use them to make fur coats or stoles for ourselves.” Surely this practical line of reasoning would sway his thinking.

“I’m not going to have a bunch of rotting skins stinking up the place.”

“And how do you think you’re going to do that?”

“We are going to stretch them over some baling wire (we used baling wire for everything), and set them in the sun.”

In retrospect, the fact that dad was still talking to us was rather astonishing. “Nothing will dry in this wet climate,” he said. “They’d just rot.”

We knew that wasn’t true because we’d read a lot of stories about trappers in the Northwest, and they trapped and dried skins and made a lot of money.

We could tell we weren’t going to make any headway with dad; so we made a lame attempt to convince mom. She was nearly as unmovable as dad but did say we could each have a rabbit’s foot. It was a small consolation to our beautiful dreams, but a lot of kids at school had been carrying around little fluffs of fur on a key chain and calling them a rabbit’s foot.

Mom gave us some yarn, and we each tied a nasty old foot to a piece and carted them around with us until we allowed dad to bury them a week later.

How much fun we had together! And no matter how widely our interests vary now, those childhood memories bond us. A few weeks ago I had dinner with Laurie. I had just finished my first week of a new job and was feeling skittish and scared; but by the end of the meal, I felt great. Amazingly, someone who has made perfume, hoop skirts, pompoms out of old sheets, and a million other things with you knows just what to say to get you back on track.

In today’s society, everything is replaceable. From furniture to purses to hand lotion – if you are no longer satisfied with the old, toss it out and buy new. Sadly, we are employing the same mentality in our friendships. The minute a friend unknowingly (or sometimes knowingly) says or doesn’t say the right thing, we toss them to the side and look for a new one. Without enduring friendships, we are becoming fractured people and losing the stability of relationships to help us walk through tough times.

Proverbs 27:9 “Ointment and perfume delight the heart, And the sweetness of a man’s friend does so by hearty counsel.” 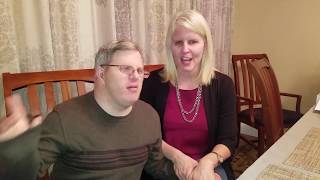